We Were asked by some friends to share this interview text; it will appear soon as an audio file and possibly later as a zine; happy reading/listening…. 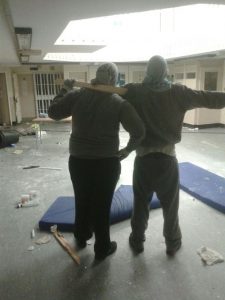 DISCLAIMER: This is the first time I have ever done an interview like this, and I am definitely out of my comfort zone! Also, it is important to note that while I wrote ‘Bang-Up and Smash: Women’s Prisons, Bail Hostels and Probation’ as an individual (supported by many patient friends), ‘The Road to Hell Is Paved with Good Intentions: Covid-19, Corbyn and ‘Crisis’ was a collective project. Any comments here on the text are entirely my own random thoughts, and not representative of our whole crew. Also, as I said in ‘Bang-Up’; I am humbly aware that I only had a relatively short sentence with amazing support….so my experience of prison, bail hostels and probation, is very specific, from a (relatively) privileged position. I don’t want my clumsy words to be read as being representative, or imply that I am making assumptions about other people engaging with the prison system.

In Bang Up and Smash you talk about the drugs rehabilitation programme for state-hostages RAPT, you described it as:
“You are not allowed to talk to other prisoners outside the unit (and therefore also have significantly reduced time you are allowed outside). The first for weeks of life on the RAPT unit are called ‘seeking safety’ this establishes you on the wing and programme. Prisoners do not engage with group therapy during this time but do have to attend workshops, and ‘emotional check-ins’. After four weeks, you then start your primary care; which consists of group ‘meditation’, and one and a half hours of group ‘therapy’ every morning, and workshops all together in the afternoon.”

‘Meditation’, ‘emotional check-ins’, ‘occasional exercise’, it seems to me that this may seem all-too-familiar to those on the outside during these days. Do you think the techniques of control which the state employs on incarcerated populations has been employed on the general population of prison island UK? How, if at all, do you think the pandemic ‘emergency measures’ accelerated this tendency?

This is a very good question. The first point I would like to make, relates to the term you use: “prison island UK”. I must say, that I find this label problematic. It has been kicking around for a while, and has always made me bristle, but it seems especially prevalent in these coronal times. I am not implying that the level of police repression and control is not full on. But the phrase “prison island” is problematic to me because it implies some kind of universal and generalised experience of prison (ie. that everyone in in the UK is in a prison -which is not the case) and also is very disempowering (I think it enables people to feel defeated and give up in the face of unprecedented levels of repression).

I can see the logic in the phrase “prison island” but, personally, I think it does a massive disservice to all those incarcerated people who are not only dealing with the general restrictions of lockdown life and the Coronavirus Act, but also the added restrictions specifically related to prisons. Whilst screws “working” during lockdown are to get a £1,700 bonus on top of overtime, people in prison are facing a period of no visits, increased bang up, and no access to things that keep people sane, like exercise. Who knows when this will end. It is certainly not a priority of the Tory government to address this.

Your question highlights an important point, about how techniques and tools use in prisons (and their related institutions: ‘detention centres’/’Immigration Removal Centres’, bail hostels, probation, social services etc) are then often rolled out into wider society (and, as we have seen time and time again, often tools developed within the UK are then copied in other places). This point I think is critical to remember; as many people have no lived experience, or connection to, incarcerated people, so they are often unaware of how many of these strategies of control are being refined behind closed doors.

“Prison, a microcosm inserted into our world but that is denied the possibility to speak” -Juan Jose Garfia, Adios Prision

As an ex-prisoner, what was particularly problematic to me last year was the lack of critical engagement that voting anarchists had in relation to Corbyn’s (and the Labour parties) policies and dogma around police and prisons. This is something that was very important for me to address in ‘The Road’. I think you could say that at times in the text we sounded judgmental (one dear comrade even said arrogant). That certainly wasn’t my intention, and it is a shame if that is the case. If it was spikey, it was from a specific place of rage and hurt, fuelled largely by my personal experiences with the state.

As we highlighted in ‘The Road’, in the run up to the 2019 election, Labour wanted to expand the police force (and the prison system) even more than the Tories. Various Labour members, including Corbyn, publicly called them out on this on numerous occasions. To have many close comrades supporting this implicitly, or willfully ignoring it (trying to blindside me with arguments about the NHS) was particularly challenging. As a side note, it is also interesting that when the ‘Coronavirus Act’ was bought in extending police powers (in the twilight period of Corbyn’s leadership and when Starmer was getting warmed up) the Labour party were calling for a kind of unity coalition with the Tories. I am mentioning this here because I think it relates to a kind of patronising attitude I have felt coming from several friends and comrades, who think that I am maybe too hung up on specifics; or that I am ‘nit picking’ in an unhelpful way in the face of such a catastrophe as Covid-19. I am not an uncaring person, but I am also critical.

To return to your question, it is interesting to reflect specifically on the RAPt (Rehabilitation for Addicted Prisoners Trust) programme that I outlined in ‘Bang-Up’ because, like many ‘recovery’ programmes that follow the ‘12 steps’, it used the language of “disease” (and “safety”) explicitly, (and extensively) as a way to divide the prison population where I was. In the current context of Covid-19 it is both terrifying and fascinating to see how quickly people adopt this dangerous rhetoric. In the mainstream press, when covering the pilot of the NHSX app on the Isle of Wight, there were various anecdotes and quotes of people saying; “it’s ok, we have the app now”; breathing out a sigh of relief that they no longer have to think for themselves about how they relate to the virus…. I think this is an extension of the logic that prison promotes and aggressively enforces… to get people to mindlessly comply; whilst simultaneously offering things like ‘group meditation’ and ‘therapeutic interventions’ as supposedly positive “options” (that are in reality compulsory) to reflect and grow, to become “safe” and “clean”.

“Caring for ourselves doesn’t mean pacifying ourselves. We should be suspicious of any understanding of self-care that identifies well-being with placidity or asks us to perform “health” for others. Can we imagine instead a form of care that would equip each of us to establish an intentional relationship to her dark side, enabling us to draw strength from the swirling chaos within? This kind of care cannot be described in platitudes. It is not a convenient agenda item to add to the program of the average non-profit organization. It demands measures that will interrupt our current roles, bringing us into conflict with society at large and even some of the people who profess to be trying to change it.” -‘Don’t Tell Me to Calm down!’ Crimethinc, 2013 ‘Self Care’

I think this point is especially important today, when we are told constantly to “stay safe”, “do our duty” and the most obnoxious of all “we are all in this together”. It feels recently like people have been drowning in a toxic tide of data; greedily drinking the information fed to us by the government, forgetting that the concept of ‘health’ is just as political as ‘prison’. One pertinent example of the current situation is for example the suspension of the so-called ‘Care Act’ 2014 (and the related development of the ‘Coronavirus Act 2020’.) The combination of these two forms of repression mean that what is classed as a ‘mental health’ condition (and who can ‘diagnose’ it) has been massively broadened, whilst at the same time, people have no legal recourse to challenging these decisions. This is a new phenomenon to many people, but anyone who has spent time inside will know that within the prison system (and it’s related infrastructures), it is the psychologists who wield the ultimate power.

“‘Health’ is a cultural fact in the broadest sense of the word, a fact that is political, economic, and social as well, a fact that is tied to a certain state of individual and collective consciousness. Every era outlines a ‘normal’ profile of health.” –Michel Foucault

Fuck the new ‘normal’! This doesn’t mean that I want people to die. Nor does it mean that I don’t take Covid-19 seriously. But the state has been sharpening it’s teeth on prisoners (and many others) for quite some time in preparation for this, and now is the time to fight back……