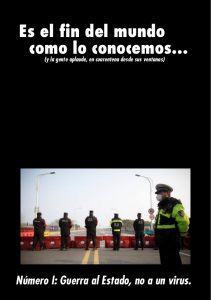 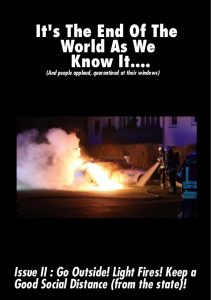 Issue II of our ongoing Journal ‘Its the end of the world as we know it….: (Go Outside, Light fires etc) is released today. In this volume of the journal we decided to focus on the varied attacks, rebellions, riots and battles across the world between the state and free wild individuals. We have actively made the choice to not include updates on repression or violence, since we have the impression, these reports are everywhere and all around us and at times become a very stagnating force. We want this second issue to be a provocation to everyone, get out from behind the screen, go out of your home (even if for no reason other than personal satisfaction), and LIGHT. IT. THE. FUCK. UP. This time around, we have been inundated with submissions and nods of things to include and we are happy to say we have many new and original texts, and the first translation into English of a text from the Greek anarchist formation ‘anarchist groups of Night Visits’ who in the last weeks committed a series of arson’s against the personal  properties/homes of a number cops, politicians, and journalists. This issue is comprised of 3 main parts: first Scattered Chronology of attacks and Rebellion which is a day by day rough calendar of different things that have happened between 11th march and 1st of April especially where the writers specifically mention making a connection to Covid 19 or the specific necessity/newness of breaking quarantine. Drawn from counter info sites in four different langues and 3 different continents we hope to put forward the broadest and  widest range of rebellions with which to warm our hearts, 2nd In depth Communiques- which is a section dedicated to longer texts which mix up action and analysis, and finally analysis- In this section we take texts from before and during the outbreak of corona which critique the notion of safety, offer an alternative to the version of the ‘We Are At War’ narrative perpetrated by countless states, and argue the need for an increase in  insurrectional activity in the coming days/weeks/months.

As well as these main parts, the journal also has a brief introduction from the D&O  collective- a correspondence between ourselves and Flower Bomb From the warzone distro, and poetry from our good friend auntie social 🙂

As always we are calling for submissions to this ongoing project; get in touch downandoutdistro(dot)riseup(dot)net PGP available in the ‘contact’ section of the site.

“We detest the turn-coating, so called anarchists all around us, who are suddenly unquestioningly abiding the states advice, laws, and lock downs. We refuse the prison logic (like all prison logics) and will never trust the state to keep us safe.  The worst Virus is the State”

“Each and every one of us has been turned into a ticking time bomb, a disgusting, diseased, infectious, monstrous, creature who should hate itself and others like it- and keep away from them as much as possible. For those of us already deemed disgusting by society (queers, trans, sexworkers, junkies, HIV positive people etc) this feeling maynot be so new; but now the stigma of the ‘diseased’ is engulfing us all.”

“Police were attacked with stones and bottles and two Iceland supermarket vans were torched outside their depo. Several cars were also smashed and set on fire across the city. Young people are already always under ‘special measures’ by the police -abuse, beatings, harassment, dispersal, special conditions – and rioting and fighting back is the only real solution, not staying in your house and being afraid. Death to the politicians, the police and those who have poisoned this world.”

“The existence of the state is the political component that originates war as we know it.  War is a tool necessary for civilization’s spreading. The need of capitalism for exponential growth is the trigger in wars for resources. The state doesn’t exist to save us from war, it’s the forefather of war instead.”