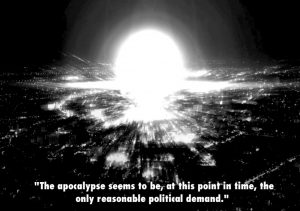 We announce the zineification of another new text in our Bootlegs series. Originally written in Portuguese by Jota Mombaça and translated into English by Daniel Lourenço ‘Toward a Gender Disobedient and Anti-Colonial Redistribution of Violence’  is a deep accounting of domination and the imposition of colonialism, both within the context of Brazil and globally. Attempting to understand the nature of the enemy, and later laying out a basis for attacking structural violence’s, ‘Toward a Gender Disobedient and Anti-Colonial Redistribution of Violence’ takes the reader from a position of quivering disdain for the brutality of this world into a position where one might be able to imagine destroying it.

Yes, we are potentially frail, but that should not be
understood as an inability or ineptitude for self-defense. To learn how defend oneself requires the articulation of other ways of understanding one’s own frailty. There are strategies, techniques and tools which only a corporeality
and a subjectivity able to inhabit frailty may come to develop. Self-defense isn’t just about striking back, but also about understanding your own limits and developing exit strategies, so as to flee when necessary. It is also about learning to read the choreographies of violence and studying ways of intervening upon them. It is about painting through fear and dealing with indisputable condition of not having peace as an option.

There is no solution. The redistribution of violence is not
able to stop the deadly machine made up of police forces, toxic masculinities and all the fictions of power. It is but one of the many ways to deal with the problem without neutralizing it. The redistribution of violence is not capable of avenging deaths, redeeming suffering, turning the game around and changing the world. There is no salvation. This here is a barricade! Not a bible.