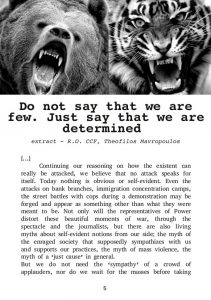 We announce the release of Volume I of ‘Left on Left Violence’ (LOLv)- “Fragments on anonymity amongst anarchists and other unnamables” a slightly satirical edition highlighting and hoping to expand conflictual  discourses within nihilist and insurrectionist practices. In this particular volume, is presented a discussion which raged some years ago across various anarcha/insurrectionist/nihilist platforms (including 325, and actforfreedomnow)  between imprisoned members of the CCF (Conspiracy the Cells of Fire) and ‘anonymous’ contributors around the question of anonymity,  the ‘communique’ form, the existence of names/groups, and other concerns. The dialogue eventually (and somewhat hilariously)  descends from a serious discussion about total anonymity vs claiming actions, into a snipey back and forth, of light disses and insults including references to ancient Greek mythology and whether or not one has a sense of humor. In LOLv, the texts are presented in a roughly chronological order, to show the back and forth nature of the discussion, alongside some reasonably hilarious images of animals squaring off against one another.

“The greek comrades write that “The name of each group we participate in is our psyche, our soul”. What a weird statement! What is there of more secret, of more intimate, of more unspeakable, than one’s psyche, one’s soul? Who would want one’s psyche thrown on the front page, or their soul regurgitated by a cathode ray tube? A name is only an identity.”

“[…]He specifically mentions that “When an action is followed by a communique, it is like a joke accompanied by an explanation.” The difference, we say, is that we are not fools to tell jokes. Instead, we chose the barricades of war as our home and fire as our comrade.”