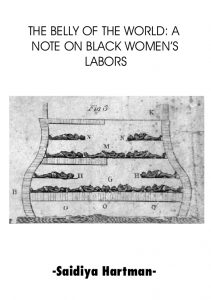 The latest title to be added to our bootlegs series ‘The Belly of the World: A Note On Black Women’s Labors’ by Saidiya Hartman. Cited in the Afro-Pessimist trajectory, this text analyses the implications of chattel and racial slavery on the lives of Black Women historically and presently and the specificities of the experience of Black Womanhood (in the United States and beyond). Concerned particularly with  the difficulties of inscribing Black Women a place in the insurrectional and revolutionary histories/narratives of black people in the United States and beyond and in understanding their position as compared to the Black populous more generally; the text attempts to follow the traces of the lives and practices of struggle of Black Women through the centuries including and proceeding slavery.

It has proven difficult, if not impossible, to assimilate black women’s domestic labors and reproductive capacities within narratives of the black worker, slave rebellion, maroonage, or black radicalism, even as this labor was critical to the creation of value, the realization of profit and the accumulation of capital. It has been no less complicated to imagine the future produced by such labors as anything other than monstrous. Certainly we know that enslaved women fled the plantation, albeit not in as great numbers as men; poisoned slaveholders; plotted resistance; dreamed of destroying the master and his house; utilized abortifacients rather than reproduce slaves; practiced infanticide rather than sentence their children to social death, the auction block, and the master’s bed; exercised autonomy in suicidal acts; gave birth to children as testament to an abiding knowledge of freedom contrary to every empirical index of the plantation; and yearned for radically different ways of being in the world.”

‘The sexuality and reproductive capacities of enslaved women were central to understanding the expanding legal conception of slavery and its inheritability. Slavery conscripted the womb, deciding the fate of the unborn and reproducing slave property by making the mark of the mother a death sentence for her child.”