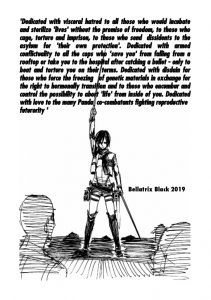 First Online release of ‘Towards and Insurrectionary Antifasism’- Originally produced by ‘problematic distro’ in physical form, we are happy to share this text from a sibling distro in its first digital version.  The text, is a meandering critique of the current state of anti fascism (with particular reference to the scene in the UK), the historical failings of traditional antifascist analysis and the centricity of purely anti fascist critiques which fail to recognize the inherent facism contained within all states, police forces and institutions of domination, as well as attempting to attack both technology and the fascist outpourings of some anti tech positions such as those held by ITS and their apologists.

“After what now seem like the riotous years following 2008, a low tide seems to have swept over the world, and a familiar pattern is reappearing. Some continue the campaign of attack which those insurrectionary days delivered, while many more become scene politicians, socialists, charity workers and many more still are caught between these alternatives, without the capacity for the former, and without the hopelessness required for the latter varieties of resignation. But ultimately this is due to the fact that the world which seemed to be threatening to burst open ten years ago, even if terribly briefly and partially, is now largely carrying on as normal. This new era of social peace finds itself aided cowardly or abetted ineffectually by the participation of anarchists.”

“I see you behind a mask, eyes shining as always but heading straight for men with tattooed arms flying national flags, in a big metal play-pen, you’re marching alongside the SWP, the RCG etc. The cops we could be running ragged on wild actions now close in on you and your chants grow fainter as theirs grow louder. And you stand there, a look of pained anger, disgust, impotence, as more bodies than you’ve ever seen at one of their marches swirl around huge screens blurting out racist poison. You wish you could storm the stage, cut the mic, tear the whole thing down. But you can’t and you don’t, you stand and watch as it starts to rain. Meanwhile immigration enforcement vans park on main roads again in Peck-ham and Whitechapel; buildings that would have made palatial squats become the rented pads of guardians; fibre-optic cables relay the latest fluctuations in price of the dollar and sterling; the areas around London get turned into construction sites for the latest mega-prison or high speed railway; A.I. and behavioural neuroscience dish out algorithmic and chemical analysis for the surveillance and commodification of our innermost feelings and needs; ATMs spit out money for city workers to spend in cocktail bars; replaced on time by G4S in the morning; boys from the elite universities burn £50 notes in front of homeless people; the police who murdered Rashan Charles and Edson Da Costa just a few months ago roll around London without obstruction; general hopelessness and desperation; often debt or loneliness induced; brings countless people to the deliverance of drugs, suicide and religious fanaticism. Everywhere a gnawing emptiness. There is no darkness; the floodlights and billboards blot out the stars at night.”

PDF HERE (NoBlogs changed the file size limit today so we can only give the Tarball sorry): Towards an Insurrectionary Antifascism.pdf.tar